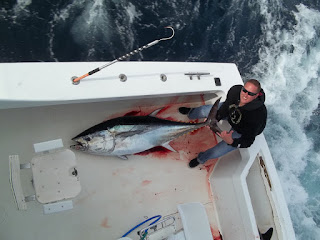 If you have never fished for Bluefin or maybe never thought to fish for Bluefin read the following and it just might change your mind.  Atlantic bluefin are native to both the western and eastern Atlantic Ocean, as well as the Mediterranean Sea. Atlantic bluefin have become extinct in the Black Sea.

Atlantic bluefin tuna may exceed 450 kilograms (990 lb) in weight, and rival the blue marlin and swordfishas the largest order of vertebrates. Throughout recorded history, the Atlantic bluefin tuna has been highly prized as a food fish. Besides their commercial value as food, the great size, speed, and power they display has attracted the admiration of fishermen, writers, and scientists.

The Atlantic bluefin tuna has been the foundation of one of the world’s most lucrative commercial fisheries. Medium-sized and large individuals are heavily targeted for the Japanese raw fish market, where all bluefin species are highly prized for sushi and sashimi.

Call to Book Your Fishing Trip